Leakages are a common problem in all hydraulics systems where pressurized medium is circulated through pipelines and pipe components with multiple connection points. The possibility of a leakage is minimized by pressure testing the cooling systems and pipelines with higher pressure than the operation pressure. Even if these tests are carried out the coolant lines might start leaking as result of constant vibration, thermal expansion, and contraction. Leakage may also be so small that it is not noticeable, because pressure won’t drop during the tests. In cases of slow leakages, the coolant has time to vaporize before it leaves any mark of leakage and for this reason the leakage is almost impossible to find. Some connection points like mechanical sealings will always have some leakages and there are no fully leak-proof mechanical sealings available in the market. Mechanical sealings are used for example at pumps shafts.

In addition to prevent the leakages and to make Adwatec cooling stations as leak proof as possible Adwatec cooling stations are also equipped by default with an advanced leakage detection system. Leakages can be monitored by following the static pressure and the coolant level in an expansion tank. The expansion tank’s main role is to reduce the pressure change due to thermal expansion and to dumper the suction side pressure drop that is caused by the pressurized coolant and the contraction of the air pockets. The coolant itself is practically incompressible, but when it contains microbubbles, it becomes compressible. The expansion tank is also used as coolant and pressure buffer. In case of leakage the cooling system can maintain it’s operation longer when pressurized expansion tank is used. If the expansion tank has coolant in it the cooling system maintains its functionality. By following the pressure of the expansion tank and coolant level the leakage can be detected early on, coolant can be added, and the corrective actions can be prepared. 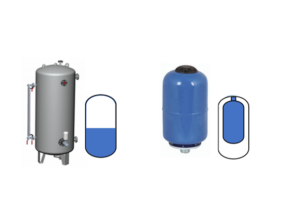 Adwatec is constantly testing and studying its’ cooling systems to improve the performance and we have taken the fight against leakages as our mission. New applications, improvements and designs are tested, developed, and implemented constantly in our testing facilities. The leakages are prevented as far as possible and in case of pressure dropping or coolant level decreasing the cooling system is monitored precisely so the leakage can be recognized and fixed before it causes any harm.